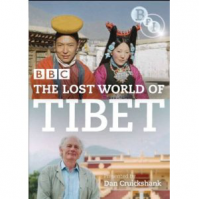 This film is being brought to television as a result of a BBC/British Film Institute co-production. A recently restored treasure-trove of colour films from the 1940s and 1950s provides the core of this astonishing film, which allows us to see what Tibet was like before its brutal occupation by China. As members of the aristocracy and the Tibetan government in exile recall, the Tibetans world revolved around a series of colourful religious festivals, taking up 68 days of the year. In The Great Prayer Festival, monks take over from the government for a few days and, whilst ceremoniously whipping their subjects, impose fines for such offences as singing in public or having a dirty house. The film includes a revealing interview with the Dalai Lama, who reminisces about how much he missed his mother and his envy for his brother who got to play with all his toys. The Dalai Lama found himself studying from his rigorous final monastic exams which included publicly debating with his elders at the same time that the Chinese were preparing to take over the country. ''We were just so engrossed in our little pond'', recalls one interviewee. ''We knew nothing, what was happening in the world, what could happen. And so we lost our country''. This is the extended 90 min version. Special Features: Original 60 minute BBC version: Booklet containing film notes