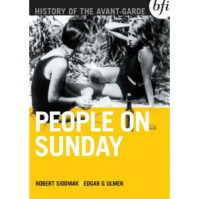 People on Sunday (1929) was the collaborative work of a formidable team of young German/Austrian film-makers, all of whom would end up making their careers in Hollywood. It was co-directed by Robert Siodmak, who went on to make several noir masterpieces of the 1940s, and Edgar Ulmer, king of the Poverty Row Z-movies. Siodmak and his brother Curt, who became a prolific Hollywood screenwriter, wrote the script in collaboration with Billy Wilder. Fred Zinnemann (High Noon, etc) was production assistant and the film was photographed by Eugen Schüfftan, special-effects wizard extraordinaire. For all the team except Schüfftan it was their first film--yet People on Sunday is like nothing any of them would ever make again.
The film is a beguiling blend of feature and documentary--a celebration of the everyday street life of late-1920s Berlin with, grafted on to it, a fictional story. As a story it's nothing startling--a commonplace affair of casual flirtations on a Sunday trip into the countryside--but it's handled with an honesty and sense of quietly ironic observation that's kept it fresh and engrossing for more than 70 years. All the five principal players were amateurs who had never acted before, and who actually worked at the jobs their characters do in the film--taxi driver, music shop assistant, wine seller and so on. They all give natural and remarkably unselfconscious performances. People on Sunday was made at the very end of the silent era, the period that had seen the greatest flowering of German cinema. Yet there's nothing nostalgic about it. Light-hearted and clear-eyed, it's full of youthful vitality.

The negative of the film has long been lost. The present print, reconstructed by the Netherlands Film Museum, restores several passages missing from previous releases and is over 95 percent complete. The orchestral score, specially composed for this release by Elena Katz-Chernin, deftly evokes the style of the period. --Philip Kemp