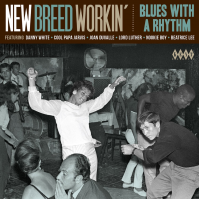 This Kent CD is aimed at R&B lovers who want to hear something new and a third of the tracks are debuting here. Ace/Kent's tapes and contacts are considerable. As well as new finds, they have looked through their collection assembled over the last forty years of catalogues. They found a rich vein of New Orleans R&B in the AFO vaults; they feature Nookie Boy's 1962 release I've Got A Feeling For You Baby alongside Robbie Lee's Let Me Know, which only emerged during their fabulous 1990s Gumbo Stew CD series and a totally unknown tape of Lucky Girl by Joan Dovalle which had evaded the earlier compilations. A further triumvirate of scorching sounds comes from the world of Cleveland Ohio indie blues labels. The barely known or recorded Pee Wee, Papa Jarvis and Big Charley & The Domans supply top-notch blues busters from the early 60s unheard since the studio date. Chet Poison Ivey takes that Crescent City approach to Now We Must Part, a recent tape find. From the same Arock/Sylvia New York stable come the nerve-tingling Cruel World and an alternate version of the Buddy Lucas-penned Steamboat. More master tape magic can be heard on Mary Johnson's R&B dance classic These Tears which comes with added brass section and sax solo. Apart from Robbie Lee's Let Me Know, they have resurrected a couple of belters from earlier Ace CDs that may have been missed by New Breed fans. Lord Luther's Poor Boy's Song is a great black pop number and loved by the Popcorn scene. Somewhat earlier and unheard until its Ace CD issue is Yes It's You by Big Boy Groves with Little Margie another perfect track for retro-dancers. From the singles of the 60s, they have Danny White's super-groovy The Twitch , whose sexy French intro has made it a hit in hip-DJ circles around the world. Varetta & The Thomases, Bertha Tillman, Beatrice Lee, Billy Ray, Little Betty and the Music City Soul Brothers provide the elusive tracks that singles collectors crave, as does Ray Agee with the compilation's latest offering (1967) which features soulful traits not often associated with the bluesman. The normally soul-oozing Ovations, on the other hand, go R&B for once in their careers with What Did I Do Wrong; tellingly it stayed in the can until issued on CD.