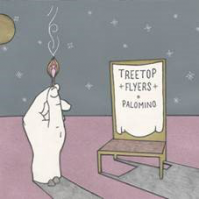 Treetop Flyers new album Palomino comes two and a half years on from their acclaimed debut album The Mountain Moves. Recorded at the band's own Soup Studios in London, self-produced along with the help of some friends - and then mixed by Jonathan Wilson (Father John Misty, Conor Oberst, Elvis Costello) - their new outlook was to embrace the unknown, and begin experimenting. New synths, new pedals and new techniques helped them to unravel their own sound, as well as conceptions of the classic qualities laid down by their forebears, ultimately uniting them with a purposely accentuated groove and unfathomably tight vocal harmonies - all threaded together by Reid's own soulful melancholy. Setting the tone for the album, opener 'You, Darling You' is a reflection on the old saying "sometimes loving someone means letting them go". In this case it's over a failed marriage, but the record picks up on some of the themes of death and departure that made up The Mountain Moves. 31 Years tracks a goodbye to a friend who passed away during the recording of their debut, and St Andrew's Cross is a lament to the passing of Reid's father, used almost in therapy by the band as a way to reconcile the past and the unknown ahead, all at once. Interestingly, it's the band's own smart production (as well as tracks like Dance Through The Night and Falling Back) that injects real life into Palomino.