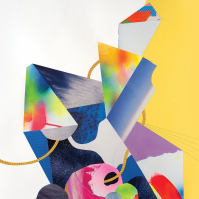 Continuing their exploration of indie-electro-guitar-pop-weirdness, Reptar returns with their second full-length album "Lurid Glow". A diverse amalgamation of sounds and styles characterize the music of Reptar, culminating from the band's disparate array of influences. Comparisons can be made to bands like Talking Heads and MGMT, but Reptar simultaneously showcases musicianship in the heritage of Frank Zappa, Rush, Mike Patton, and Tortoise - creating a blend of party music suitable for music nerds. The band's 2012 debut, Body Faucet, was characterized by Pitchfork as "Afro-tribalelectro-twee-pop" for college kids who "seriously like nothing more than to throw the fuck down" (3.0 out of 10). Now in 2015, Reptar is back to deliver on the hype. Lurid Glow is an expansive, artful development for the band, as catchy as it is difficult to classify. Building upon their party-wielding instincts, Lurid Glow fuses arrangements of horns, keyboards, guitars, and much more into compositionallyrefined, booty-shaking anthems. Whether it's the pulsating "Ice Black Sand" that transforms effortlessly from droning arpeggios to gorgeous pop choruses, the simple steel drum serenade of "Amanda", or the 80s-prog-tinged "Cable", Lurid Glow is a compelling statement from a band on their own unruly trajectory.