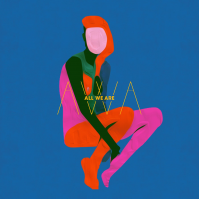 All We Are are a global gathering made up of Ireland’s Richard 'O Flynn (drums, vocals), Norway’s Guro Gikling (bass, vocals) and Brazil’s Luis Santos (guitar, vocals), who met at university in Liverpool.

Written initially in a cabin in the isolated Norwegian mountains, with follow-up sessions in a secluded cottage in North Wales, the album was finished and perfected in their studio in a disused school in Liverpool. The record was then recorded in London with producer Dan Carey (Bat For Lashes, M.I.A, Hot Chip).

A total democracy, the band write all music and lyrics together. Inspired by a shared love of hip-hop and soul music, Guro calls their sound “psychedelic boogie”.

Born of long, late nights, dreamy melodies, supple psychedelics and gorgeous midnight disco grooves – this is the sublime, swirling sound of All We Are.