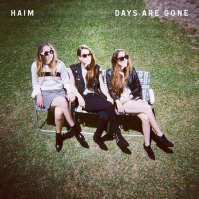 â€˜Days Are Goneâ€™ will be released on the 30th September through Polydor Records.

Beginning the year as the BBC Sound of 2013 winners, off the back of two limited edition EPs and a handful of sold-out UK live dates, HAIM holed themselves up in the studio and spent the next few months perfecting a record that is arguably one of the most hotly anticipated in years. Itâ€™s a record that the band refused to let go of until they were 100% confident with it, and is all the stronger for their patience.

â€˜Days Are Goneâ€™ is a record that wrestles with that early live potential and fully realises it, showcasing the breadth of their collective and individual talents. Having performed live together on stages from a very early age, itâ€™s that innate understanding of each otherâ€™s musicianship that acts as both the strength and catalyst behind everything the band do.

Plenty has already been made of the bandâ€™s R&B influences, but itâ€™s a shimmering guitar-fuelled, West Coast pop that surfaces across the 11 tracks on the LP. Sharing all the songwriting between themselves, â€˜Days Are Goneâ€™ is a record that features songs that stretches right back to when the band first formed (Forever, The Wire, Let Me Go), and songs written in the latter stages of 2012.

Opening on their 2013 Spring EP release â€˜Fallingâ€™, itâ€™s smartly followed by the song that introduced them back in March 2012, â€˜Foreverâ€™. â€˜The Wireâ€™, a huge live favourite and forthcoming single, receives a slick production but loses none of the energy and passion that makes it so enticing on stage.