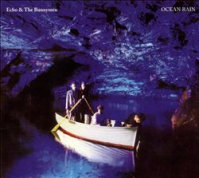 The fourth of our Echo & The Bunnymen re-issues comes as a Limited Edition with initial pressings on SILVER coloured vinyl. Originally released in May 1984, 'Ocean Rain' features the singles 'The Killing Moon', 'Silver' and 'Seven Seas'. The band wrote most of the songs for the album in 1983. Then in early 1984 they srated sessions for the album in Les Studio des Dames and Studio Davout in Paris using a 35 piece orchestra, assisted by Adam Peters for string arrangements and Henri Lonstan at des Dames as engineer. Other sessions took place back in the UK in Bath and Liverpool. McCulloch infact re-recorded most of his vocals back in Amazon Studio's in Liverpool as he was unhappy with the Paris sessions. Continuing the bands prominent use of strings which were used so successfully on 'Back Of Love' on Porcupine, Will Sergeant describes 'Ocean Rain' as 'something conceptual with lush orchestration; not Mantovani, something with a twist, dark and stormy, battering rain; all of that'. It was indeed a brave move by a band with its very roots firmly stuck in rock'n'roll. The album actually received a mixed response on release, with many critisizing the use of strings and the softening of the bands sound from that of the early offerings. Rolling Stone going so far as 'too often a monochromatic dirge of banal existential imagery cloaked around the mere skeleton of a musical idea'. Strong stuff indeed. But time has proved a great healer and the wider perspective is that the album is indeed the bands unrivalled pinnacle. It looks again as though opinion softened over the years and the true appreciation surfaced for what is undoubtably a masterpiece. With 'Killing Moon' particularly heaped with praise for its dizzying high and McCulluch's voice as torn silk and magnificent. In robert Dimery's 1001 Albums You Must Hear Before You Die he wrote thats the albums confidence, lush stings, romance, warmth and poetry, means that it stands the test of times better than any other Bunnymen album. Martyn Atkins again designed the cover with Brian Griffin the photographer. With the band wanting continue the elemental theme of the previous three albums, the shot used for the front cover is a picture of the the band in a rowing boat which was taken inside Carnglaze Caverns, Liskeard in Cornwall. In his 2002 book on the Bunnymen author chris Adams describes the cover as 'a perfect visual representation of arguably the Bunnymen's finest album'. In Sept 2008 the band played the Royal Albert Hall with a 16 piece backing orchestra. The poster for which depicts the band in the rowing boat from the album cover infront of the Royal Albert Hall.