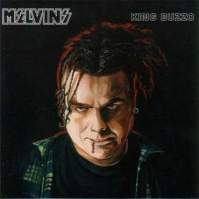 Whether conceived as a well-crafted musical prank, homage, or method of seeing what each member could cough up, the Melvins mirrored Kiss in endeavoring solo albums by everyone in the band. And, like Kiss, the Melvins employed the same cover art style and lettering. Hmmm? Perhaps an homage, or joke, it's tough to tell. King Buzzo is the strongest of the three, and certainly the most akin to an actual Melvins album. Isabella opens with a pummeling, repeated drum line, some distorted guitar chugging, and Buzzo vocalizing something over the maelstrom. Track two is a strange, quasi-industrial loop; while Annum is a slight piece of understated pop. The final track, like track one, benefits from similarly loud drumming, although the vocals are in narrative form. Who provides that narration and drumming? Why, Dave Grohl of Nirvana and Foo Fighters, who had known Buzzo for quite some time. Oddly enough, here he is credited as Dale Nixon, due to legal issues with Nirvana's label, Geffen. As an interesting note, Dale Nixon was the name Black Flag used on My War for the bass player who wasn't: Greg Ginn played both guitar and bass, but credited the mysterious, non-existent Dale Nixon with that duty.