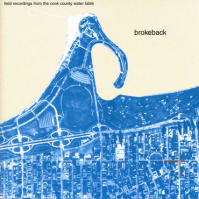 Field Recordings From the Cook County Water Table is Brokebacks’s debut album, originally released in 1999. Sold out on vinyl for over thirteen years, this re-issue is pressed on high quality virgin vinyl and packaged with an artworked inner sleeve and a free download card. Brokeback is Douglas McCombs. Douglas may be familiar to many of you as the bassist for Eleventh Dream Day, Tortoise and Pullman. During the last two years Brokeback has released two singles and played numerous live dates throughout the U.S. and Europe. Through Brokeback, Douglas has sought to explore something not as densely structured as his other musical outings with a focus on rhythm and texture. The idea with Brokeback is to keep things simple and let the melodies hang in the air. By the nature of this decision the music is sparse, but not without sounding full and realized. Field Recordings From The Cook County Water Table is the most actualized offering of the Brokeback experience to date, whether it be recorded or live. Field Recordings… features contributions from Noel Kupersmith (Chicago Underground Orchestra) and Josh Abrams (Sam Prekop Band / Town and Country), whose versatile bass playing helped Douglas achieve the textural depth for this debut and first in-depth documentation of Brokeback. Noel has been a frequent collaborator in Brokeback's live setting. Rob Mazurek (Chicago Underground Orchestra / Isotope 217) plays cornet on the opening track, After the Internationals and Mary Hansen (Stereolab) lends her angelic voice to the song, The Great Banks. Both John Herndon and John McEntire contributed their percussive talents, while McEntire handled the recording duties by himself. However at the heart of Brokeback lies the vision and playing of Doug McCombs.