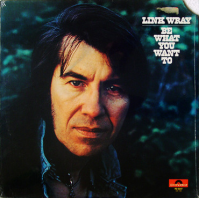 Be What You Want To

Originally released on Polydor, this is the first time the album gets the vinyl treatment since 1973. Now available as a gorgeously packaged deluxe vinyl edition, exclusively for Record Store Day 2017. Strictly limited to 2500 copies. Fred Lincoln 'Link' Wray, Jr. (1929-2005) born of Shawnee Native American parents was an American rock and roll guitarist, songwriter and vocalist who became popular in the late 1950s. Though he began in country music, his musical style went on to consist primarily