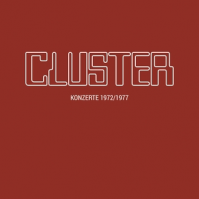 The two authorized recordings presented here vividly conjure up the atmosphere, perhaps even the magic, of a Cluster performance back in the day. One took place in 1977 during a science fiction festival in Metz (France). The other dates back to an earlier show in Hamburg's Fabrik venue. Cluster played three gigs in the city in 1971/1972, including the one partially included on Cluster II. Cluster shows routinely lasted six hours or more, luring both the band and the audience into a state of intoxication, no doubt acutely enhanced by the intake of certain substances. The buzzwords of the moment were: psychedelic, magical, ritualistic, corresponding more or less to the Dionysian hedonism which pervades certain styles of contemporary music culture today. It is worth noting this context as useful background when listening to the live recordings presented here. In the beginning, Cluster's music was rough, brutal and spontaneous, created with the most rudimentary tools. Unlike many of their colleagues in this pioneering age, Cluster did not use any synthesizers, sequencers or highend amps. But this proved to be their strength, rather than a disadvantage. Roedelius and Moebius played in the truest sense of the word, untroubled by mechanical processes. They used their machines but were not dependent on them. Intuition was the dominant force, the risk of potential failure was readily understood to be as much a part of their vibrant art as success. Perfection had become a concept associated with convention. Indeed, anyone who was lucky enough to witness Cluster play in the 1970s will testify that things sometimes went badly wrong. But mostly they did not, and then the real magic was tangible. A utopian, previously undiscovered world of sound was created in the presence of the beholder. The sound quality of these two documents is average. A successful performance was considered more important than a perfect recording thereof. We as listeners should accept that today. Our reward is a short journey into the nascent heart of Cluster's creative universe, just after the big bang.