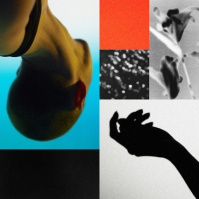 LuckyMe proudly present Feel Infinite, the debut album from Jacques Greene. Jacques Greene is the enigmatic, young artist who broke out of independent electronic labels Uno, 3024, Night Slugs and LuckyMe as a genre-defining producer and DJ (via 2011’s Another Girl - one of Pitchfork’s Songs Of The Decade, 2013’s underground favourite On Your Side featuring How To Dress Well and 2016’s undeniable summer anthem You Can’t Deny). Jacques Greene crafted a musical blueprint that inspired a generation who were raised on and looked to bring together the intersection of contemporary music growing up in the 90s: hip hop, RnB, house and techno. At its heart, Feel Infinite is a world of music connected to the utopian idea of club culture - music about the club, rather than specifically club music in and of itself. Written over the course of two years, this debut album is the purest, most personal expression of the Jacques Greene sound and emotion created by the born and raised Montreal artist, renowned for collaborating and remixing Tinashe, Radiohead, Sampha and Shlohmo. In 2016, Jacques Greene released the surprise single You Can’t Deny to acclaim and adulation, a beautifully undeniable, soulful techno record, followed up with Afterglow, a euphoric club record - both of which are included on the album alongside a further nine stunning tracks. Includes a fold out poster with new and exclusive artwork by Hassan Rahim.