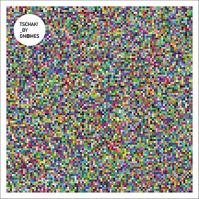 From adversity can come triumph, and from catharsis inspiration. Such has been the case for Gnoomes, the threesome hailing from Perm, Russia, whose second release for Rocket Recordings, Tschak! arrives in the wake of considerable turbulence and tumult within their personal lives and society itself, all of which has only been fuel for a creative epiphany that has seen them create a deeply evocative work rich with vibrant experimentation and saturated in a widescreen sense of wonder. It may only have been eighteen months since Ngan!, the band’s first release for Rocket, whose self-styled ‘stargaze’ approach marked a glorious collision between melodic sweetness, skysurfing guitar experimentation and motorik magnificence, yet the band have already moved on to a sonic landscape still more adventurous and ethereal on Tschak!, not to mention an emotionally resonant approach that’s bewitching to witness. Taking in torrents of guitar noise and electronic extrapolations both blissfully kosmische and aggressively abrasive, it exists outside of all or any convenient genres, a vivid and singular work by three dreamers-at-heart forced to manifest their vision into a psychic defence to the circumstances surrounding them. Working in splendid isolation thanks to a studio space provided by their work for a local radio station, the band had time and space for the alchemical process of creating Tschak! entirely on their own terms. Central to the this were a collection of Russian synths that they gathered, whose eccentric arpeggios and analogue textures form crucial ingredients on songs like Severokamsk and the title track, arriving at a sound that forms a star-crossed and timeless marriage between the experimentation of krautrock and the lineage of Warp Records. Forging forth into unknown realms both physical and metaphysical, Gnoomes recently completed a UK tour - including an appearance at Liverpool International Festival Of Psychedelia. Yet with the dreamlike radiance of the potent and otherworldly Tschak! on their side, this adventure is already well on its way.