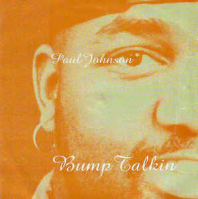 Paul Johnsons debut album originally released in 1995 is a classy mixture of deep soulful house and harder, more techno style house beats. Born and raised in the birthplace of House Music, Paul Johnson has released a vast amount of music for some of the most consistently underground dance labels before hooking up with Peacefrog. 12" releases on the likes of Cajual / Relief and Dance Mania led to his debut album release Bump Talkin' in 1996. This and the follow up Feel The Music became two of the most talked about releases of their time. His remix work for Stacy Kidd, Joey Beltram, Green Velvet, Armando, CC Penniston, Ron Trent, K-Alexi, and Steve Poindexter amongst many others have made their way into all the big DJ’s boxes, many of which remain there to this day. Paul's breakthrough moment arrived in 1999 with his International hit Get Down which is still heard in clubs and on the radio to this day.