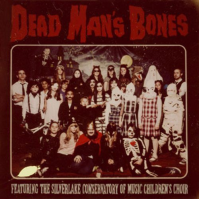 Sounding like a cross between Arcade Fire and Tom Waits playing doo wop, gospel and 50's rock 'n' roll while a children's choir supply backing vocals, this is an eerie, spooky album lyrically obsessed with monsters, zombies and werewolves. Vocalist Ryan Gosling sounds very much like a world weary Zach Condon. The album was recorded entirley using analog equipment and using the best of only three takes. This gives is an organic, slightly shambolic sound that only makes it all the more endearing. It veers from piano led atmospheric gothic laments to quirky pop and all feature huge singalong choruses, it's an album almost out of step with the times but features such great songwriting it doesn't matter when it was concieved or recorded.