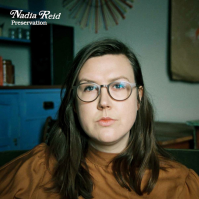 Self-discovery doesn’t come easy. It’s usually a rite of passage to get burned before the wounds can heal and often takes a new perspective to truly understand yourself. 18 months and 10,000kms travelled since many needles first dropped on her debut LP Listen To Formation Look For The Signs, it’s safe to say with new album Preservation, Nadia Reid now knows herself extremely well. Through cavernous lows, blissful highs and globe-trotting adventures, music has been by Nadia’s side the entire way. Whether in New Zealand’s familiar rugged beaches and mountains, brutally windy Wellington, her hometown harbour Port Chalmers or the untrodden territory of faceless hotel rooms or the jungle in Kuala Lumpur, every episode of loss, heartbreak, and disappointment glimmers throughout. An ode to self-reflection and self-betterment, Preservation is the sound of Nadia showing her true colours, taking back a bit of power, and learning more about herself. Deeply intellectual but felt by all, it punches harder than before. Nadia’s beautifully warm vocals coolly wrap around feelings of turbulence, and exude a gently improved confidence. Returning to the production skills of Ben Edwards in his Sitting Room studios and long term guitarist Sam Taylor, this time around everything is rubbed in more grit and channels Nadia’s deftly profound take on life and whilst we already knew it, her own realisation that it is music which drives her. Nadia has seen the world she once knew become a whole lot larger. Simply singing her truth has taken her to becoming acquainted with her Scottish and Irish heritage during her first full European tour, downtime with long-time sister-from-another-mister Aldous Harding and even making the odd award shortlist along the way (NZ’s 2016 Taite Music Prize). Rather than growth in its most typical sense of any artist finding their way in the world, Preservation marks a natural passing of time – what you pick up along the way is a bonus.