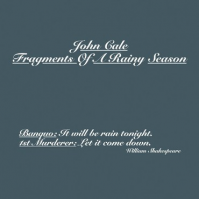 Fragments Of A Rainy Season

Domino Records reissue John Cale’s classic live album Fragments Of A Rainy Season, featuring his revered interpretation of Leonard Cohen’s Hallelujah amongst many solo versions from his enduring catalogue and previously unreleased outtakes. Fragments Of A Rainy Season was the first live John Cale album to feature him performing solo and ‘unplugged’ - before that term became a mid 1990s buzzword. In contrast to the jaundiced punk truculence of Sabotage / Live (1979) or Even Cowgirls Get The Blues (1986), Fragments Of A Rainy Season gives us Cale at his most melodic and moving, a mellowed and certainly a soberer man in a Yamamoto jacket and a lopsided haircut running through a selection of his prettiest songs. It’s a Cale many love deeply, a man alone at a concert-hall Steinway revisiting the pop-rock of Paris 1919 and A Child’s Christmas In Wales, as wistful and whimsical as any 70s singer songwriter holding court at LA’s Troubadour club. It’s the Cale who disavowed the spiky nihilism and decadence of the Velvets, inspired instead by melodicism of Paul McCartney and Brian Wilson (to whom he’d paid haunting homage on Slow Dazzle’s brilliant Beach Boys pastiche Mr. Wilson). It’s the Cale who improbably took a staff job at Warner-Reprise in LA and - for an all-too-brief moment - became part of the Burbank producers’ mafia alongside Lenny Waronker and his laidback chums. (Lest we forget, 1973’s Paris 1919 featured members of Little Feat and The Crusaders among the backing musicians.) Cale being Cale, Fragments Of A Rainy Season isn’t all rueful tenderness. The deceptively jaunty Darling I Need You is flippantly introduced as a song about “religious awakening in the southern part of the United States,” while Elvis’ Heartbreak Hotel is no less gothic in the solo version here than it is in the Grand Guignol horror show of the original on Slow Dazzle. Guts is as close as Cale ever came to Lou Reed at his most withering.