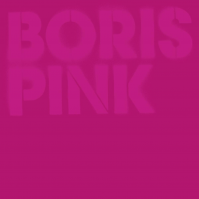 'Pink', the landmark 2006 album by Boris, which earned widespread critical praise including Pitchfork's Top 10 Albums of 2006 is reissued in a deluxe edition to commemorate the album's 10th anniversary. LTD 3LP with 6 page booklet in a die-cut cardboard box. Includes original version of Boris' classic album on LP1 and LP2, plus 9 previously unreleased "Forbidden Songs recorded during the 'Pink' sessions on LP3. 'Pink' Vinyl has original japanese track list and extended versions of tracks "Farewell", "Pseudo-Bread" and "My Machine". Limited 2CD with 8 panel folder and 16 page booklet with lyrics for placed in a plastic jacket. The deluxe 3LP box set and 2CD features an entire album of previously unreleased tracks recorded during the 'Pink' album sessions in 2004-2005. The bonus Forbidden Songs collects 9 tracks of the same hyperactive, accessible and aggressive caliber of the original album, available here for the first time, mixed (with additional editing and arrangement) in 2015 and mastered in January 2016. Like the original U.S. vinyl release, the 'Pink' (Deluxe Edition) LP set has three longer edits of songs that were truncated on the original CD issue ("Farewell", "Pseudo-Bread" and "My Machine"). Otherwise, both the LP & CD versions have the same audio as the 2006 release. And, 'Pink' (Deluxe Edition) also features the artwork of the original Japanese release, made by the band members themselves. In 2006, 'Pink' was Boris' 10th album and a major breakthrough that earned new fans outside of the underground metal community -- the track "Farewell" was even featured in Jim Jarmusch's classic film The Limits of Control. The album landed on countless "best of the year" lists from underground metal sites to mainstream rock magazines. And the praise was certainly well deserved for its more accessible sound and explorations into shoegaze and ambient structures alongside brutal noise, searing psychedelia and apocalyptic doom. 'Pink' succeeds at what most bands cannot do swiftly changing styles from song to song, while always sounding distinctly like themselves. The seamless, explosive set of fan favorites from the classic longtime lineup of drummer/vocalist Atsuo, guitarist/vocalist Wata and bassist/guitarist/vocalist Takeshi still sounds as mindblowing as it did a decade ago. And, Forbidden Songs continues with the same unbridled creativity and ferocity. These songs aren't outliers, they're rather more like the director's cut version of the original album. Boris will perform Pink in it's entirety on their European Headline tour in Fall 2016. Expect reviews in all the major publications and websites!!