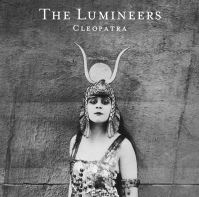 Four years have passed since The Lumineers released their debut self-titled album. They hit the alternative landscape with such a strong force, it's a surprise how long it took for them to return. Now after that long wait, the second album, called 'Cleopatra' is released. Frontman Wesley Schultz and co-founder Jeremiah Fraites got back to basics when it came time to write for the 11-track collection. And while the raw, jangly guitars, parlor-room piano chords, and marching band snare rolls from the first record remain intact, 'Cleopatra' has a welcome, added heft.