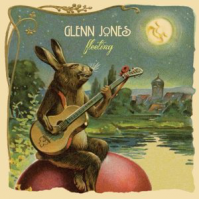 Glenn Jones is a master of American Primitive Guitar, a style invented in the late 1950s by John Fahey, whose traditional fingerpicking techniques and wide-ranging influences were used to create modern original compositions. Jones, who led the post-rock ensemble Cul de Sac, brings his own made-up tunings, the use of custom-crafted partial capos, and a highly skilled picking style on both banjo and guitar, to create personal compositions that are lyrical, emotive and elegant. Fleeting was recorded in a house on the banks of the Rancocas Creek in Mount Holly, New Jersey. Cozy, cluttered with artifacts of a life well-lived (by its owner Bill Bolger), the house struck the right note for Jones and his recording engineer, Laura Baird. Jones in particular likes spaces with character that are remote from the day-to-day world. Jones and Baird made no attempt to soundproof the recording environment, happy to let sounds filtering in from the outdoors to become part of the listening experience.