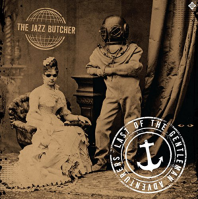 "The Jazz Butcher was always something of a unique vehicle, a sort of musical dune buggy - it interweaves the influence of The Velvet Underground & Syd Barrett with the new wave energies of the day and leaves us all richer for looking in" Pete Kember / Spacemen 3 // The re-release of 'Last Of The Gentlemen Adventurers' mark s the 30th anniversary of The Jazz Butcher Conspiracy. Originally limited to just 1000 copies only Fire Records will be releasing the album worldwide for the first time to coincide with a run of tour dates to be announced. // 'With blood from an interminable improv on his cleaver ... people say he uses every last bit of a slaughtered solo clarinet except its squeal ... the Jazz Butcher, one of this threadbare island's greatest living songwriters, herein purveys his choicest cuts. All left to hang as part of their extensive maturation process, melodies so tender that they're falling off the bone, a gamey sweetness in the lyrics, this sumptuous salmagundi has the flavour of a signature dish, something left till last. A work that speaks from a hard-earned perspective and means every word of it, Last of the Gentleman Adventurers is a delightfully ill-humoured reassessment of contemporary culture and the dwindling amount of room remaining for a gentleman adventurer within it. From the atavistic primate yearnings for a vanished jungle-land in 'Animals' to the elegiac message-in-a-bottle bobbing on an eerie Californian surf in 'Shakey', what we're offered is a scuffed and well-stamped passport to the gone world, stained with Tokay, singed by oval cigarettes you'll never see again. The fatalistic Gallic shrug of 'Tombe dans les pommes' lifts a dismissive brow at life's vicissitudes, while 'Count Me Out' speaks of the dignified withdrawal from a situation that's no longer either interesting or acceptable. Far from a weary resignation letter, though, the pieces here more accurately represent a flinty and determined manifesto, a defiant staking out of the unsupervised and teeming wasteland to which our illustrious former territory has been reduced, a vital roster of remaining freedoms. Whether that be in appreciating the bohemian elan of next-door's quadruped or instigating a romance we may be hard pressed to survive, these songs are testimonials to life, perhaps especially to life at bay. The bluesy and relentless rocket of 'Solar Core' provides a glorious reminder to select our destination carefully, and never be found wanting in ambition. 'All the Saints' and its affecting coda spell out the emotionally conservationist agenda, with a spirited dismissal of irrelevant modernity in favour of pursuing vitally important individual dreams.' Alan Moore, Northampton, Sept 2012 // The record features Pat Fish (guitar, organ, vocals), Max Eider (guitar / vocals), Tim Harries (bass), Jonny Mattock (drums / percussion), Rich Formby (guitar / harmonium), Owen Jones (accordion) & Sonic Boom (ghost chorus / drones on Saints Prayer ). 'Last Of The Gentlemen Adventurers' is also the start of a new reissue series, with next year bringing 2 new box sets encompassing the Glass Era and the Creation Era. Volume 2 will contain Fishcoteque , Big Planet Scary Planet , Condition Blue and Cult Of The Basement .