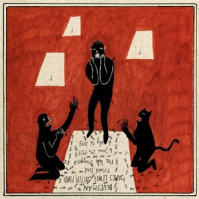 The music that the trio, Guadalupe Plata, conjure is derived essentially from the dark stuff. They describe the process as a straining to be podrío; to be rotten, & they talk of "involution" - the music inhabits that place in their collective imagination where is the “demonic force which straddles the blues & “cante jondo”.” If it is blues or rock then for some reason you can not imagine it being made in any other language than their dark, accented Andalucian Spanish – albeit much of their music as performed is accompanied vocally by baby yelps, Little Richard stream of consciousness or insistent invocations of women’s names.
The album was recorded in London in the second week of December, 2014, live to eight track tape at Toerag Studios with Liam Watson. It begins with a closeness, a barometric pressure. The howling begins. At times the drum will be hollow, pounding, funereal, at others cymbals & rims skitter in delirium, or a boozy piano staggers across the dance floor. The words to the songs are often staccato phrases, unrhymed, taunts, laments, sometimes daft & childish. It has the psychedelic qualities of a trip - there are hayseed guitars, panther gasps, repetition, variation, an instrumental driven by call & response to Paco's washtub bass, then a sudden, minute focus of the sound of bare palms on a taut drum skin.