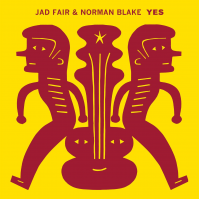 Two legends, together again. Teenage Fanclub's Norman Blake and Half Japanese's Jad Fair have teamed up to bring you their new magnum opus, "Yes". Encompassing all the songwriting eccentricities that have made these guys famous, this new collaborative album also features some of the most genteel, engagingly catchy, and downright adorable music in recent memory. Norman Blake and Jad Fair originally collaborated over a decade ago on the Teenage Fanclub and Jad Fair album "Words of Wisdom and Hope" (Domino / Alternative Tentacles). Unlike the simple, aggressive style of Half Japanese, the 13 new tracks on "Yes" feature refined, guitar-laden power pop and saccharin-sweet melodies, accompanied by backup singers and layered horn arrangements. Fair's characteristically-manic vocal style is still present, but when coupled with the head-bopping, articulately-layered arrangements of Norman Blake, the result is a potently earnest album that is brimming with positivity.