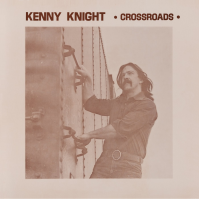 RIYL The Grateful Dead, The Youngbloods, Gram Parsons, Gene Clark, Lawrence Hammond, F.J. McMahon, pedal steel guitars, and Leslie speakers. The first-ever reissue of the private-press country-rock rarity by Colorado auto body painter, Marine, and garage band lifer Kenny Knight he played in the original '60s Black Flag Crossroads recalls a homebrew American Beauty-era Grateful Dead in its world-weary, low-key mood and indelible songwriting. Faded, anxious, melancholy, and beautifully woozy, this out-of-time document belies its 1980 release date. Produced in collaboration with Numero Group, it features liner notes by writer and collector Michael Klausman and Kenny himself. I met up with Kenny Knight in the parking lot of a Guitar Center at the southern end of Denver a couple years back. Despite the intervening decades since Kenny had released his sole LP, it was easy to recognize him as he stepped out of his pickup truck; although his hair was shorter, he still retained the compact frame and thoughtful gaze you see on the cover of Crossroads. About a year and half before our meeting, I came across Kenny's record sitting in the bins at a shop in Denver, and it just had that look: sepia tones, a rugged guy hanging off a train, all original songs, a pedal steel player in the credits. From the first couple of notes I was totally elated, for these were beautifully well-crafted songs, timeless, really, and impossible to date. It turned out there was nary a mention to be found on Google of this album, and none of my collector friends had ever seen it. The fact of the matter is this LP and its songs, which are simply undeniable; if I hadn't picked up Crossroads and passed it around, it would only have been a matter of time before someone else did. There s a very singular combination of world-weariness and hope running throughout Crossroads, a still timely grappling with the realities of getting by in this country. You can hear it most clearly in 'America', which is at turns a paean to this nation, as well a plea to it: 'don't lock me out.' This juggling of sophisticated dualities extends even to his love songs, as on One Down (possibly the album's finest track, and one which could sit comfortably next to American Beauty's best), where he asks, 'how much can one heart take?' while still acknowledging that he'll 'stay in love forever more.' As we talked in that Guitar Center parking lot, I discovered a quietly humble man, proud of the album he'd made and seemingly appreciative that I'd expressed interest, that the folks for whom I'd been playing it also thought it was great. It was sadly obvious, though, that he didn t think Crossroads had received the reception he felt it had deserved; he told me rather regretfully that he had tossed all the leftover copies of the pressing into a dumpster at some point during the 1990s. And while he didn't expressly say it, I got the sense that he had no other choice but to throw them out, as if he just couldn't face the album's commercial failure any longer. Some records take a while to find their audience, however, and Crossroads is one of them; it's just a matter of holding on.