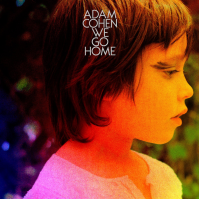 We Go Home, Cohen's fifth album, is a homemade affair. Since his band was playing in Europe, Adam decided to set up shop in the little white house on the Greek island of Hydra where he had spent much of his childhood. They continued recording in Montreal, where Adam was born, in the house where he spent his earliest years. "I knew I was painting a target on my back, making my album in the so-called homes of Leonard Cohen, but they're my homes too. These are the walls that saw me grow up the most and that I needed to come back to. My muse is my home". He has released four albums - his eponymously titled debut in 1998 followed by a French language album Melancolista in 2004, then as lead singer/guitarist of the band Low Millions he released the album Ex-Girlfriends in 2004. His feted 2011 album Like A Man earned him his first gold record in Canada and saw him tour the globe.