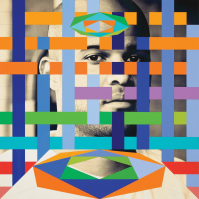 Hallways is Homeboy Sandmans second full-length record on Stones Throw. The album is an ode to the space between where you are and where you are headed; a space in flux, and a space where Sandman himself thrives. True to form, it weaves witticism into even its most serious messages. Producers on Hallways include Oh No, Knxwledge, Blu, DJ Spinna and Jonwayne, who produced the first single, "America, The Beautiful." Homeboy Sandmans witty raps have garnered praise from both hip hop and mainstream music press, from, featured by media including NPR, Clash Magazine, the Evening Standard, BBC 6Music, and Pitchfork. Rolling Stone recently branded him an Artist To Watch and praised his skill for wordplay that keeps you hooked, while Pitchfork describes him as hyper-intelligent and one of the best pure lyricists around. The prolific and outspoken Queens MC has also had essays prominently published in Gawker and Huffington Post. Since signing with Stones Throw Records in 2011, Homeboy Sandman has released a full length, First Of A Living Breed, along with a series of five short records, establishing himself as one of the most productive and creative lyricists of this generation.