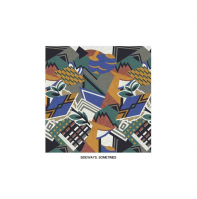 On 23rd April, CYMBALS will release their new record, Sideways, Sometimes, through Tough Love. Written, recorded and produced over five days on Lightship 95, a boat moored in the Thames, the EP has a cleaner, more coherent feel than last year's debut album, Unlearn.

Continuing the theme for somewhat special artwork, the band enlisted Robin Hulme, a fabric designer for Liberty, to create a one-off design that will grace the cover of the record.