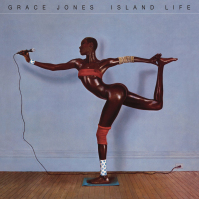 Island Life is Grace Jones' compilation album released in December 1985, summing up the first nine years of her musical career. The album sits among Jones' best-selling works. Features songs from most of Jones' Island Records albums: Portfolio, Fame, Warm Leatherette, Nightclubbing, Living My Life, and Slave to the Rhythm. Some of the songs appeared in edited forms, and a remix of "Love Is the Drug" was included. No new songs were recorded for the album. Island Life consists only of previously released material, produced by Tom Moulton, Chris Blackwell, Alex Sadkin and Trevor Horn. American writer and journalist Glenn O'Brien wrote an essay for the record sleeve. The cover picture is one of the most famous images of Grace Jones and was created by her then-partner Jean-Paul Goude.