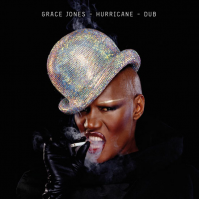 An expanded edition of the brilliant 2008 album Hurricane!

The 63-year-old pop icon will include an extra ten dub-remixed versions of the album's tracks, along with the original set on a double disc edition of the record titled Hurricane Dub.

The repackaged album will be released on September 5, with the extra tracks produced by Ivor Guest.

The album's artwork was made in collaboration with Jones's longtime creative partner Jean-Paul Goude and features the singer wearing a Philip Treacy hat.

Jones previously claimed that she turned down an opportunity to duet with Lady GaGa as she would rather work with someone who is "more original".