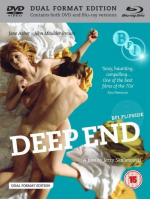 The Swinging Sixties are over and the long, grey morning after has only just begun. But there are still eye-opening new experiences in store for wet-behind-the-ears teenager Mike (John Moulder-Brown) when he takes a job at a rundown London swimming baths. After one of its more mature visitors steamily attempts to take advantage (Diana Dors, in a superb cameo), he gradually wises up to find himself adrift with an increasingly obsessive interest in sassy, self-assured, co-worker Susan (played by a seductive Jane Asher). Giddily he follows her into the grimy underbelly of Soho for a long dark night of the soul -- soundtracked with great intensity by legendary Krautrock band Can. Will Mike sabotage Susan's relationship with her fiancé and get together with her instead?

Jerzy Skolimowski's compelling, darkly poetic portrait of Britain in an era of uncertainty and changing sexual mores now makes a long overdue return to the screen in a beautiful new digital restoration with extensive bonus features.