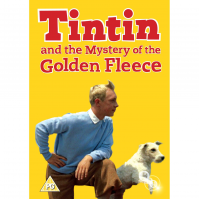 TINTIN AND THE GOLDEN FLEECE

A surprise message from Istanbul is about to ruin Captain Haddock's day. Named as sole beneficiary in the will of his late comrade Captain Paparanic, Haddock and his best friend, intrepid boy reporter Tintin (Jean-Pierre Talbot), journey to Turkey to claim a strangely disappointing bounty - but is all as it seems? Aided by their friends, (the eccentric Professor Calculus and faithful Snowy the dog), Tintin and Haddock set out to solve the mystery of Paparanic's bequest - a rusty old ship called the Golden Fleece.

Along the way they confront slippery lawyers, ex-pirates, dangerous gangsters and the bumbling Thom(p)son detectives in an action-packed journey that takes them from Turkey to Greece. One of the very few adaptations to meet with Tintin creator Herge's approval, Tintin and the Mystery of the Golden Fleece is a spirited live-action take on his iconic comic creation, featuring all his best-loved characters. Jean-Pierre Talbot's expert martial arts skills and his uncanny portrayal of Tintin, and George Wilson's larger-than-life Captain Haddock combine to lift the comic books from page to screen in a film which no Tintin fan, young and old, will want to be without.