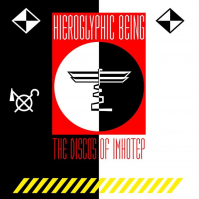 The Discos of Imhotep

Jamal Moss aka Hieroglyphic Being releases his definitive solo album of 2016 - 'The Disco's Of Imhotep' - via Ninja Tune's Technicolour imprint. He has built a sterling reputation both as a producer and live performer of deep, mesmeric experimental electronics and free jazz rooted in his native Chicago and his relationship with the city's fertile underground club scene. Inspired by the likes of Ron Trent, DJ Rush (residents at The Reactor where he danced week in week out) and Ron Hardy, Moss was mentored by visionary producers Steve Pointdexter and Adonis, who showed him the drum machines that were the backbone of the Movement and whom encouraged his early forays into music production. Releasing prolifically on his own Mathematics Recordings imprint and a clutch of other imprints including RVNG Intl. and Soul Jazz / SOTU collaborating with Marshall Allen of Sun Ra's Arkestra and Noleian Reusse (as Africans With Mainframes) - Moss has cemented his stature as a unique creative force. He balances his ancient heritage and musical DNA with a passion to experiment, create and channel music as a healing force, which has resulted in his art being tagged 'Afrofuturist'. Moss, however, prefers to describe his output as Synth Expressionism / Rhythmic Cubism and would rather be viewed simply as a promoter of Nubian Rights. Describing 'The Disco's Of Imhotep' he says "The Disco's Of Imhotep is about creating Frequencies and Vibrations for the Listener that are conducive for him or her to Heal The Mind and Body and Enrich the Soul by creating Hemi-Synced Harmonies and music that contains embedded Binaural Beats.