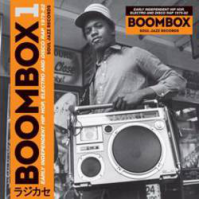 Soul Jazz Records' new 'Boombox' features some of the many innovative underground first-wave of rap records made in New York in the period 1979-82, all released on small, independent, often family-concern record companies, at a time when hip-hop music still remained under the radar. This first exuberant wave of innocent, upbeat, 'party on the block' rap records were the first to try and create the sounds heard in community centres, block parties and street jams that initially took place in the Bronx in the mid-1970s. But where Flash, Kool Herc and Bambaataa were back-spinning, mixing and scratching together now classic breakbeat records like The Incredible Bongo Band's 'Apache' or Babe Ruth's 'The Mexican', these first rap records were all made using live bands, often replaying then current disco tunes, whilst MCs rapped over the top, creating a unique sound that later became known derisively as 'old school'. And while hip-hop started in the Bronx, rap on vinyl began in Harlem where long-time established rhythm and blues producer-owned record companies such as Joe Robinson's Enjoy Records, Paul Winley's Winley Records, Delmar Donnel's Delmar International and Jack 'Fatman' Taylor's Rojac and Tayster were the first off the mark to realise the commercial potential of rap music - releasing early ground-breaking records that all quickly followed in the wake of the first rap record, The Sugarhill Gang's 'Rappers Delight', a million-selling worldwide hit. This collection celebrates these first old-school rap records, bringing together rare, classic and obscure tracks released in the early days of rap.