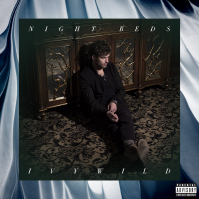 Night Beds, the musical project of 26-year-old Colorado Springs native Winston Yellen, received much acclaim for his 2013 debut album, Country Sleep, scoring plaudits for its tortured take on alt country and Yellen's soaring vocals. But Yellen has always been much more than another singer-songwriter. "When Country Sleep came out, I had never made songs like that before," explains Yellen, who currently splits his time between Nashville and Los Angeles. "That was a departure for me. That wasn't my bread and butter." The charismatic, enticingly unhinged Yellen had been living in a house that used to belong to Johnny Cash and the atmosphere had taken an effect, but after finishing that album and before Country Sleep was even released, Yellen began experimenting with the kind of melancholic, neon-tinged R&B that makes up the mesmerising Ivywild.