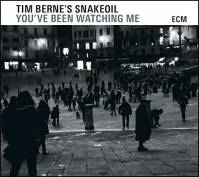 You've Been Watching Me

Tim Berne's third ECM album, 'You've Been Watching Me', sees the saxophonist-composer again leading his dynamic New York band Snakeoil, but with the quartet now a quintet with the arrival of guitarist Ryan Ferreira, whose sound adds textural allure.
The group's 2013 release, 'Shadow Man', garnered Berne some of the highest praise of his career as a composer and bandleader. DownBeat said: "This music rocks and thinks, explores, deconstructs, and swings, in its own identifiably angular, Berne-ian way."

If Berne has hit a new peak with his writing on this new recording, his band has reached a heightened state of collective interaction. Snakeoil can still be bracingly kinetic. But there is new space in these compositions and more lyrical focus to the improvisations, leading to a dramatic, even cinematic experience in such tracks as "Embraceable Me." Berne's music has never been richer or more arresting.

'Snakeoil', from 2012, was Berne's first studio album after nearly a decade of live recordings; the music represented not only a new band but an exciting new era in the leader's work, more harmonically rich and detail-conscious. 'Shadow Man', released the following year, aimed to document the powerful dynamics of the confident, road-honed Snakeoil band, virtually live in the studio. 'You've Been Watching Me' - recorded, like 'Shadow Man', at the Clubhouse in upstate New York, with production and mixing by ECM veteran David Torn - documents a further evolutionary leap. "I look at studio records as like little movies," Berne says. "And rather than make a sequel, I'd always rather make an entirely new movie."

Tim Berne was recently named No. 7 of New York City's "essential jazz icons" by Time Out New York and declared "a saxophonist and composer of granite conviction" by The New York Times.