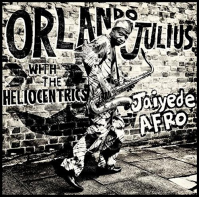 Strut are proud to announce the first ever internationally released new studio album by one of the all-time legends of Nigerian music, Orlando Julius, in a mouth-watering new collaboration with London super-group The Heliocentrics. At his club residency in Ibadan, Orlando Julius was one of the very first to begin fusing US R&B with traditional highlife during the mid-‘60s with his Modern Aces band. His ‘Super Afro Soul’ album from ’66 set the blueprint for a whole generation of Afrobeat and Afro funk stars and, in an illustrious career, Julius met and played with Louis Armstrong, The Crusaders, Hugh Masekela and Lamont Dozier among others, famously co-composing the classic ‘Going Back To My Roots’ in 1979 whilst based in the USA. For ‘Jaiyede Afro’, Julius takes us back to his own roots, revisiting several compositions from his early years which have never previously been recorded. The title track recalls his experiences as a boy: “my mother would go to group meetings with other women. They would sing together and play drums, I would play along with them and we would sing this song together.” Infectious chant ‘Omo Oba Blues’ is a traditional song sung at Julius’ school which he re-arranged in 1965 for his Modern Aces band. The epic Afrobeat jam ‘Be Counted’ stems from his years in the USA: “this was written around 1976 while I was living on the West coast. I did start recording it for the ‘Sisi Sade’ album around 1985 but it was never finished.” Other tracks include ‘Buje Buje’ and ‘Aseni’, both re-worked arrangements from his rare ‘Orlando Julius and The Afro Sounders’ album from 1973.Recorded at the Heliocentrics’ fully analogue HQ in North London, the band follow their memorable collaborations with Mulatu Astatke and Lloyd Miller by taking Orlando’s sound into new, progressive directions, retaining the raw grit of his early work and adding psychedelic touches and adventurous new arrangements. They also contribute live favourite, the James Brown cover ‘In The Middle’ and a series of memorable shorter interludes.