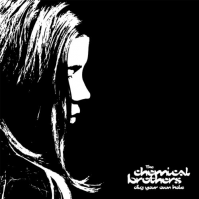 Dig Your Own Hole

The Chemical Brothers Ed Simons and Tom Rowlands waste no time on their nuclear-weapon of a second album proving they are masters of the techno groove. Dig Your Own Hole opens with a sampled shout-out by old-school gangsta Schoolly D, a syncopated bass line, and a drum loop that gives credence to the song's title, Block Rockin' Beats. This smorgasbord of sounds - a hallucinatory interweaving of hip-hop, techno, trance and the Chemicals' trademark synthesized guitar loop - builds up and cold-rocks the first five minutes of the record like a tsunami crashing ashore. Unlike most productions in the electronic / dance-music universe, the music on Dig Your Own Hole also has the weight of great rock and roll. What makes Dig Your Own Hole the personification of modern pop music at its chaotic best, and a funky agent of change. Dig Your Own Hole is built on a repetition of beats, samples and skewered sounds, but that doesn't mean it's a repetitive album. between bass-heavy house tunes like It Doesn't Matter and Elektro Bank, the Chemicals show where their pop-oriented interests lie - in tradition. whether butting heads with the Beatles (Setting Sun, which features vocals by Oasis' Noel Gallagher), exploring English folk tonalities (Where Do i Begin, featuring Beth Orton) or venturing on sprawling acid-rock voyages (the instrumental Private Psychedelic Reel, with Mercury Rev's Jonathan Donahue), the Chemicals refashion familiar styles with a beat-heavy, electronic gleam. far from digging a hole, the Chemicals are actually building a bridge, to "where it's at".