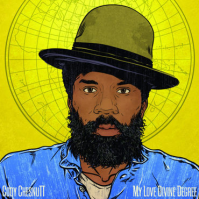 Cody ChesnuTT, the legendary soul troubadour known for his frank and raw storytelling, releases his first album in four years, the RnB and gospel-flecked My Love Divine Degree. Cody’s career began back in 2002 with the release of his edgy, lo-fi debut, The Headphone Masterpiece. After being nominated for two MTV Music Awards, Cody took a family-man retreat from music to reflect and rest after his meteoric rise to fame after his infamous collaboration with The Roots on a reworked version of his hit single The Seed (The Seed 2.0). He returned in 2012 with his second album Landing on a Hundred, and in addition to his solo projects, has contributed to the soundtracks for Oscar Award winning films 12 Years A Slave and Idris Elba Presents Mi Mandela. Wearing his poetic license on his skin like a battle scar, Cody’s third full-length album, My Love Divine Degree has been produced by Anthony The Twilight Tone Khan, a BMI Award winning, Grammy-nominated producer, songwriter, and DJ known for his work with Kanye West, Common, John Legend, and Pusha T.