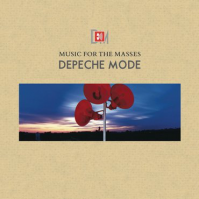 Music For The Masses

180 Gram Vinyl. Music for the Masses is the sixth studio album by Depeche Mode. It was originally released on 28 September 1987 by Mute Records. This album is a culmination of Depeche Mode's middle-period experimentation. More informed by Goth than techno, it is still anchored by plenty of the larger-than-life-baritone melodrama so distinctive of David Gahan's vocals. The most experimental track is Pimpf - a song that heave-hoes along with the synthesized emulation of a Russian men's choir. Although nowhere near fast enough to be danceable, the commanding Never Let Me Down ranks as the best single on the track, with the most hummable Strangelove coming in at a close second. Each song is a praiseworthy accomplishment, but the singles here set off the experimental tracks, making the album seem thematically schizophrenic.