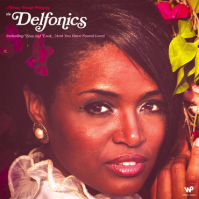 The Delfonics is the quintessential sweet-soul group. Hailing from Philadelphia, the crew formed in the mid-'60s, with the definitive original lineup as lead vocalist and songwriter William Hart, his brother Wilbert Hart, and mutual high-school friend Randy Cain (later replaced by Major Harris). With the help of producer/arranger Thom Bell—and with William's signature falsetto—the Delfonics set the tone for all other sweet-soul groups that would follow. Between 1968 and 1974, the Delfonics had twenty charting singles and won a Grammy for their massive hit Didn't I (Blow Your Mind This Time). Out of their twenty hits, William Hart wrote or co-wrote eighteen of them, thirteen with collaborator Thom Bell, like La-La Means I Love You, He Don't Really Love You, and Ready or Not Here I Come (Can't Hide From Love). After five albums, the Delfonics would break up for good in 1975. Brothers William and Wilbert parted ways and over the years often toured separately with different forms of the group. But over forty years after writing his first hit, lead singer and songwriter William Hart has put his unmistakable falsetto back on analog tape and reinvented the Delfonics brand for a new generation. Los Angeles producer/composer Adrian Younge envisioned a modern-day Delfonics album and pitched the idea to William Hart, who hopped a plane from Philly to L.A. and began work on a new album. Younge helped to reshape the Delfonics by bringing on board two excellent young vocalists, Loren Oden and Saudia Mills—as well as Om'Mas Keith on the single Stop and Look (And You Have Found Love) —to work alongside William. Adrian Younge is a self-taught multi-instrumentalist who traded in his MPC sampler for a carefully curated studio of authentic gear. Younge rocketed to international recognition after composing the original score for the film Black Dynamite and has since release ground-breaking projects including The Souls of Mischief’s There Is Only Now and Ghostface Killah’s Twelve Reasons to Die concept albums. Younge brings a unique perspective on modern rhythm and blues. "I was studying Delfonics stuff for years," Younge reveals. "I studied Delfonics to do the Black Dynamite stuff. I've been a fan, and I've just studied their music for so long that when I got the opportunity to do this, it just really blew my mind." From the very beginning, it was Younge's intention to create an old-school Delfonics vibe but offer a very hip-hop-informed perspective. There are distinguishing musical elements that Delfonics fans will recognize, like the electric sitar guitar, the French horn, string arrangements, and the tympani. "I want people to expect something classic but not expect to hear the same thing rehashed," Younge says. "I want to push it forward. William and I strived to push this forward. Younge now makes this breath-taking musical outing available once again on his own Linear Labs imprint.