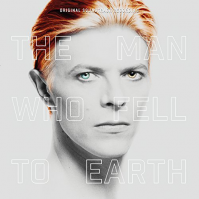 The Man Who Fell to Earth

The first release of the soundtrack to David Bowie's 1976 cult film 'The Man Who Fell To Earth containing seminal pieces written for the film by John Phillips and Stomu Yamashta. The film itself reached cult status due to Bowie's outstanding performance, and confirmed the film's director Nic Roeg, and book's author Walter Tevis, as champions of their respective fields. The music, highly celebrated but until now unavailable as a body of work, can now finally be acknowledged in its own light. Little is known, and much has been asked, as to why the soundtrack was never originally released, but due to lost tapes recently being uncovered it is now possible to present the original recordings. John Phillips of the Mamas and Papas composed and recorded much of the music for the film. The majority of Phillips' compositions have been unavailable for 40 years, until now.