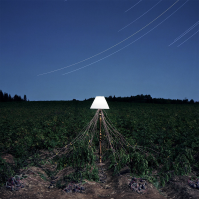 Thomas Mullarney III and Jacob Gossett are unstoppable. The New York artists, collectively known as Beacon, have been on a productive hot streak since 2012, and their e¬fforts continue to pay¬. "When we weren’t writing," Mullarney starts, "we hit the road and didn’t really look back. We toured the US five times since The Ways We Separate came out, building this project the old-fashioned way." And Beacon's natural, time-tested process has brought us Escapements, their sophomore album for Ghostly. "We went into this feeling liberated," continues the singer/producer, and Gossett seems to echo his thought: "This record is in part our attempt to formulate what Beacon is going to look and sound like going forward." Escapements is about time, to put it simply, and all of the baggage it brings. The title is taken from clock mechanics; escapements are timekeeping regulators designed to transfer energy at a constant pace. "I was attracted to this concept because of the entropy it implies," Mullarney explains. "Friction and changes in amplitude over time mean every escapement, no matter how well crafted, will lose its accuracy and e¬ectively slow down time via its own decay." This theme is delicately explored through Beacon's music and lyrics, engaging ideas of pain and loss with a surreal palette. Whereas the duo's debut was more streamlined and defined, Escapements thrives on an amorphous, free-flowing nature.