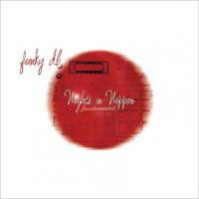 The Nights in Nippon Jazzstrumental Album (N.I.N.J.A.) is the excellent Funky DL Hip-Hop Jazzstrumental album, serving as a soothing musical tribute to the many cities of Japan. With each track dedicated to a Japanese city or town, this is the very first time Funky DL has ever produced and released an instrumental album based on tracks that he has never recorded any vocals for. As no stranger to the diligent studio process, Funky DL contemplated the idea of adding soothing and ambient background vocal chants and harmonies (both male and female) without the use of actual words, to help keep the vibe of each track alive and uniquely interesting throughout its play. Nights in Nippon makes the perfect backdrop for chilling, dining, entertaining and relaxing as the album explores the jazzy grooves based on one of the greatest countries in the world... Nippon (Japan). This has instantly become Funky DL's most popular instrumental Hip-Hop album among fans, rapidly garnering more and more listeners worldwide. Perfect for late night car-cruising or open-window chilling, releasing a sense of calm and contentment for any avid and discernable contemporary jazz enthused hip-hop listener.