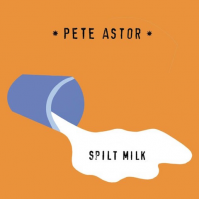 Spilt Milk is the brand new album from indie auteur Pete Astor (The Loft, The Weather Prophets). It was recorded onto ½ inch tape at the home studio of James Hoare of Ultimate Painting, The Proper Ornaments and Veronica Falls, with James playing guitar, bass, drums, keyboards and singing backing vocals. He was , says Astor, an amazing band. Other contributions came from members of Astor's live band, with Pam Berry (Black Tambourine, Withered Hand) supplying vocals, Jack Hayter (Hefner) on pedal steel, Alison Cotton (The Left Outsides) on viola, and Robin Christian (Male Bonding) and Susan Milanovic (Feathers) on drums. The album has all the hallmarks of a future Pete Astor classic, drawing together key strands and tributaries of his work over the years, blending intuitive songwriting, acute lyrics and incisive melodies. After many years making more experimental, electronic music Astor has come full circle to the sound that made his name. From the opening track Really Something to the recent single Mr Music (a favourite of Marc Riley and Gideon Coe on BBC 6 music) the album's re-connects Astor's bespoke guitar pop with his long-standing embrace of The Velvet Underground's musical DNA. Other standout tracks include My Right Hand , a hymn to everyone's best friend, with guest appearances from Tony Hancock, Marvin Gaye, Philip Larkin and a host of ex-girlfriends; the slow burning drama of The Getting There recalling the atmospheres of Astor's 80s kindred spirits, The Go-Betweens. Also, there is the wry drive of Very Good Lock , summed up by Astor as 'a description of an injurious medical condition that often affects the male of the species'. Elsewhere there are the gorgeous harmonies of the grown up country lament Good Enough , which wouldn't be out of place on one of George Jones' most heartbroken albums. Spilt Milk is part of a continuum: from Astor's beginnings with The Loft and The Weather Prophets on Creation Records in the 1980s, via his solo work through the 1990s and his more left field albums with The Wisdom of Harry and Ellis Island Sound on Matador Records, Heavenly and Peacefrog, through to his return to solo work with the Songbox album in 2012