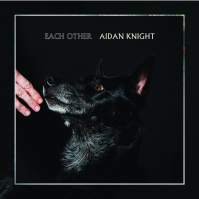 Each Other took just over a year to make and had the band recording across Canada in BC, Ontario and Quebec. Knight and the band (Olivier Clements, David Barry, Colin Nealis, Julia Knight) began recording in Bath, Ontario, a rural town in eastern Ontario in which the main industry is housing the provinces largest maximum security prison. Aidan enlisted Marcus Paquin, who has worked with The National, Arcade Fire, Local Natives and Stars, to produce the album. The band and Paquin were meticulous with each song, piecing together the raw energy of the live show along with the layered textures that could only be captured in the studio. After leaving Bath, the band reunited with engineer John Anderson, who had been at the helm of Aidan's previous two albums, in British Columbia. Aidan then took the music back to Montreal, where he laid down the vocals with Paquin and mixing engineer Mathieu Parisian (Patrick Watson, Cirque de Soleil). It is hard to pin down the specific sounds that influence Aidan, you'll find the emotional and musical depth of The Antlers Hospice , the intimate and sombre delivery of a Damien Jurado and a burst of late 90's Built To Spill. Yet Each Other possesses it's own unique mood. Challenging yet comforting, a poignant album for our time, steeped in melancholy but with a brittle optimism and ultimately a joyful auditory experience for any true music fan.