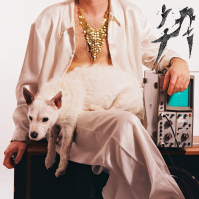 Inji is the debut solo album by Sam Dust, AKA LA PRIEST. Across its ten audaciously imaginative tracks, Inji reasserts Dust as a truly idiosyncratic voice in British music, applying the same frantically eclectic, mischievous and wilfully absurd spirit of his previous band, the beloved Late of the Pier, to ever more nuanced and affecting songwriting and composition.

Recorded over a reclusive period spanning five years following the disbandment of Late of the Pier in which Dust travelled the world, did scientific research, worked on the creation of a number of new inventions and produced several secret musical projects, Inji is a record that has its own logic and exists in its own time zone.

From the obscene space-age stadium rock guitar solo of "Oino", the maddeningly catchy digi-dub single that Dust leaked sample-by-sample on a suitably enigmatic website at the turn of the year to "Learning To Love", the record's gargantuan, eight minute long prog-house centrepiece and "Occasion", a melting martian Prince come-on, Inji confounds and delights in equal measure and at every turn.

Throughout all the songs there's a reliance on feeling and intimation as opposed to any one lyrical theme, and although the notion of love, its joys and trials, heaviness and absurdity, can often be glimpsed, it's in a non-linear way that recalls the disruptive, deliberately misleading pop of artists such as David Sylvian, Arthur Russell and David Byrne. So when Dust opines "was I born to love you?" on "Mountain", it's just as likely to be about the titular mountain, or his dog, or the entire world itself, or nothing at all as it is any real object of romantic affection.

If it doesn't conform it's because it's not supposed to.