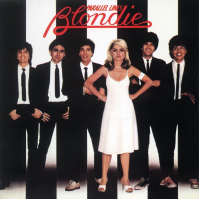 Although initially successful in the United Kingdom and Australia, Blondie was regarded as an underground band in the United States until the release of Parallel Lines in 1978. Over the next three years, the band achieved several hit singles including "Call Me", "Atomic" and "Heart of Glass" and became noted for its eclectic mix of musical styles incorporating elements of disco, pop, rap, and reggae, while retaining a basic style as a new wave band. Following on from the vinyl boxed set released in December 2014; six of the band’s studio albums originally released between 1976 and 1982, are now available individually on 180g heavyweight vinyl and include download vouchers.