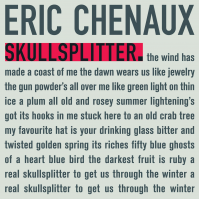 Eric Chenaux has emerged as one of the most distinctive, innovative and original voices in what might be called avant-garde balladry, juxtaposing his gorgeously pure and open singing against a guitar sound and style that truly stands alone. Skullsplitter is the impressive new album that confirms Chenaux's singular aesthetic: genuine, natural, unaffected vocals gliding through slow, smoky melodies while electric and nylon-string guitars are deployed with adventurously experimental, dextrous, semi-improvisational technique and texture. Skullsplitter stands as a welcome evolution from Chenaux's previous song-based album Guitar & Voice (2012), which was widely celebrated as his best work to date, championed by The Wire, Said The Gramophone, Stereophile and others for its unique sensibility and sensitivity. Skullsplitter builds on these strengths, with Chenaux working his concise array of signal-bending devices (volume, wah and freeze pedals) with a remarkable and idiosyncratic fluidity that's integral to the expressivity he brings to the guitar, and his voice at the calm center of this stormy micro-climate of bodily kinetics and woozy playing. On Skullsplitter, Chenaux's vocals are like a high pressure system, riding on clear bright air, stabilizing the roiling, changeable atmosphere of the guitars underneath; a gem of an album in an increasingly luminous discography