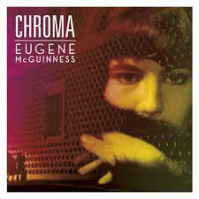 The eleven-track album was recorded and produced by Dan Carey at his South London studio, and features arguably one of the best rhythm sections in the UK, Tom and Leo from the Invisible.

After the polish and pop of last album, The Invitation To The Voyage, Chroma treads a simpler, more spontaneous path (â€œI wanted to do a direct, stripped-back guitar albumâ€ explains McGuinness), perfectly showcasing his timeless song writing talent.